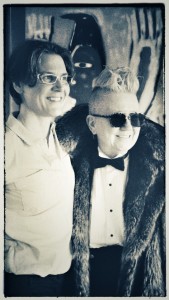 I was at a very special party last Saturday evening, wonderful not only because of the good food and lively company present, but because it was a celebration of the unique justice more likely possible when people represent themselves.

It all started last September, when Erin and Mia, women I then knew only casually, asked to meet with me about their court case. In rough shape myself from a heart-crushing breakup, I hesitated to take on coaching anyone through a complicated proceeding. That I did has become one of my best decisions. In the months that followed (seven,  to be exact) I learned from them not only how dynamic the concept of justice can be but also, had my belief affirmed that committed partners, supported by loving community, can triumph over problems which would test the metal of a saint.

Six years earlier, my clients (and now dear friends) had bought a property in Nanaimo, a house intended to be both their workplace and home. Having relied on statements made by the vendors (both verbally and in writing) about what good shape the place was in, after taking possession of it, they were joined the next morning by legions of moisture ants which swarmed the bedroom downstairs, were flooded the first time one shower was used and found that flooring had been laid over wet carpet. The problems just went on. Designated structurally unsound, Erin sued.

From the moment the trial began, Erin and Mia met with tactics designed to get rid of their case as soon as possible. Day after day I watched them go into that courtroom, steeling themselves to face senior counsel who used every strategic advantage he could muster in an attempt to shut them down. And day after day both left exhausted but undaunted, ready to go home and prepare for whatever he could throw at them during the next round in court.

As it turns out, their nemesis lawyer was an expensive one, and after 20 days in court, the opposition ran out of money to pay him. They informed the judge that having spent $100,000.00 on their lawyer, they too would now be proceeding on their own. The Settlement Hearing which they had rejected while represented by counsel then became an opportunity. It lasted three hours, for most of that a stalemate.

What happened next was a moment of profound justice: In it, Erin’s heart broke open. Her compassion extended to the people sitting beside her who she had pursued tenaciously for just a little compensation. She insisted they settle this matter right then and there because after all, it was really about the house and not about anyone being “bad”. Without their lawyer, everyone got to be people, not a “position” in a case. A settlement which would allow Erin and Mia to pay some bills and let everyone involved get on with their lives was reached.

But here’s what I really want to say: Erin and Mia’s success goes far broader and deeper than being court room champions. It goes to holding to truth over tactics, demonstrating honour in the face of cruelty and ultimately, finding grace under fire.

I may be the one dressed up like a celebrity in the above photo (taken on party night), but by refusing to let go of justice as they defined it, Erin and Mia were the real stars.

With congratulations and gratitude to Erin, Mia, Joan, Colleen (MacKenzie Friend), Dr. Laurel, Jenn, June, Denise and all the others who made up Erin and Mia’s litigation team. You were an inspiration to me, and a model for all Self-Represented Litigants